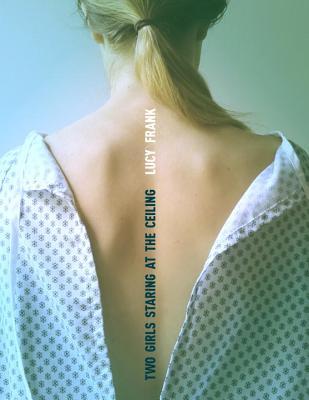 This book follows Chess, a girl who was having one of the most romantic nights of her life when things went south and an embarrassing accident leaves her in the hospital where it is discovered that she has Crohn’s Disease. She gets put in a room with another girl who also has Crohn’s Disease. Only this girl, Shannon, has been treating it most of her life. It makes Chess wonder if she will be like Shannon in a couple of years, back in the hospital having another surgery.

The layout. When I opened this book just to look at it, the first thing I noticed was the unique layout. It made me want to read the book immediately.  Most pages have a line down the middle. The line acts as the curtain that is dividing them in the hospital room, I thought that was super neat and gave a more hospital feel to it.

Verse. The story is written in verse format, which is something I’m kind of on the fence about. I have only read one other book written in verse so I’m not used to it. I know that it is pretty hard to write in verse, but I think that Frank did a great job with it. I still felt connected with the characters and I learned things about their lives. I feel like it being written in verse added a new layer of almost mystery to the story.

The girls. These two girls are so different and Shannon’s attitude is just great. She’s kind of just edgy, no nonsense, and isn’t afraid to tell anyone how they feel. While Chess is quite and uncomplaining, most of the time.

These are not in the same format as they are in the book, I changed format for ease of posting.

“And in the silence left by all the words unsaid, its pretty clear I’ve stepped off the edge of my life Into sickland.”

“Who’s ‘you’ when your own body is your biggest enemy? If her own body can’t recognize her, how can she?”

“I wish I could just be me. Without my body.”

“We don’t take stress. We give stress.”

The F word is used a couple of times, along with other curse words.

I doubt it, unless you know someone who is going through Crohn’s Disease then maybe.

Three out of five hedgehogs.

I loved the format and I thought the book as a whole was unique, but I just felt like it was missing something  There were also times when I wasn’t 100% sure what was going on.

Lucy Frank who you can read a lot more about here on her site.

You can watch Frank read a passage of the book here.

What are your thoughts on books written in verse?