I read this book over a couple of days. I tried to read it last month but I couldn’t get past the first chapter, I’m glad I gave it a second chance. It was a pretty quick read, but It didn’t seem like anything special, to me it felt almost generic. I feel like there were a few simple things that would’ve elevated the book a bit and added to the story. Nonetheless it was a sweet, simple, and clean love story. 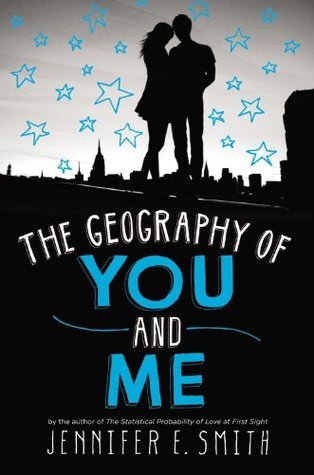 Lucy and Owen meet somewhere between the tenth and eleventh floors of a New York City apartment building, on an elevator rendered useless by a citywide blackout. After they’re rescued, they spend a single night together, wandering the darkened streets and marveling at the rare appearance of stars above Manhattan. But once the power is restored, so is reality. Lucy soon moves to Edinburgh with her parents, while Owen heads out west with his father.

Lucy and Owen’s relationship plays out across the globe as they stay in touch through postcards, occasional e-mails, and—finally—a reunion in the city where they first met.

A carefully charted map of a long-distance relationship, Jennifer E. Smith’s new novel shows that the center of the world isn’t necessarily a place. It can be a person, too.

The Travel. I really liked the travel aspect of it. It made the book move quickly, and I loved getting to read about all of the different places.

Postcards. I thought the postcard thing was cute and different. It was a refreshing to see something other than just emails, Facebook messages, and texts.

The character growth. I feel like most of the time we see characters grow it’s not very noticeable growth. That wasn’t the case with this book. There was so much growth from both the characters and their families. I loved watching Lucy and her mom grow closer together towards the end.

Owen’s mom. Even though she passed away before the book started her presence was there throughout this book. Reading all of Owen’s memories of her and the things she did were just so bittersweet.

Not so favorite things:

I was pretty disappointed that we didn’t get to see the actual postcards. They played such a big part in the book I had expected to at least see the back with the characters handwriting on it. It would have made the book stand out more and made it a bit more fun.

The ending was also one of those kinds of endings that frustrates me. There was no epilogue, and I had my heart set on an epilogue. However, it was a cute ending, and I think if I had gone into the chapter thinking that it was the end I wouldn’t have felt cheated.

“…It stuck her as the truest form of kindness, the most basic sort of love: to be worried about the one who was worrying about you.”

“How long could a single night really be expected to last? How far could you stretch such a small collection of minutes? He was just a boy on the roof. She was just a girl in an elevator.”

No, in fact I can’t remember a single curse word.

A few kisses, but it was really clean.

I give it three out of five hedgehogs

Jennifer E. Smith, I haven’t read any of her other novels but I plan to. Several people I have talked to say that this is their least favorite book of hers and that her others ones are better so I think I will give them a chance.

Did you have mixed feelings about this book? Have you read any of her other books like More Happy Than Not?